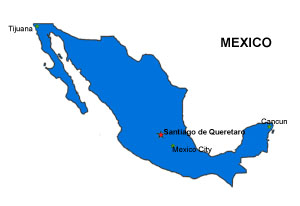 In 2005, nearly ten years after the affiliation was first proposed, Bakersfield and the historic city of Queretaro, Mexico signed a Sister City agreement. In 1992, Mr. Fernando Chavez of the Hispanic Chamber of Commerce, approached Bakersfield Sister City with the idea of establishing a Sister City relationship with a city in Mexico. This idea was enthusiastically supported by Bob Ortiz and Richard Escalera. At first the cities of Vera Cruz and then Durango were proposed, but soon the colonial city of Santiago de Querétaro became the focus. In 1996, Gerardo de la Isla, representing the city of Querétaro, attended the California Sister Cities Conference in Bakersfield. However, Querétaro already had a sister city relationship with Orange, California, and the bylaws of Sister Cities International did not permit them to form an affiliation with another California city, so the idea was abandoned for a time.

In 2003, following changes in the SCI bylaws, the dream of forming a Sister City relationship with Querétaro was revived. Mr. Armando Rivera Mayor of the City of Santiago de Querétaro, Mexico, and two city council members were part of the 36 member delegation from Querétaro that visited the city of Bakersfield in March of 2005 for the formal signing of the Sister City agreements between our two cities. Mayor Hall hosted a dinner at the Petroleum Club, while the Querétaro Sister City Committee, ably led by Mr. Manuel Arriola, hosted the signing luncheon. In July of 2005, a Bakersfield delegation of 40 members from the greater Bakersfield area had a great opportunity to witness the ceremonial signature by Mayors Hall and Rivera in Querétaro. Highlights of exchanges with Querétaro include the performances by the Orquesta Tipica de Querétaro Ixchel at the Fox Theater in 2006, donations to the Querétaro Bomberos (Volunteer Fire Department) and the continuing training of EMTs in Querétaro by Hall Ambulance personnel, and the visit to Querétaro by a small Bakersfield delegation in September 2010 to participate in the celebration of the Bicentenario of  Mexican Independence.

Santiago de Querétaro (1990 pop. 385,503) is the capital of Querétaro state, in central Mexico. It is a distribution center with industries producing machinery and farm implements; the city’s cotton mills are among the most important in Mexico. 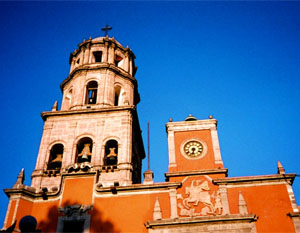 An Aztec city, Querétaro was conquered by the Spanish in 1531. Officially established in 1656, Querétaro has been the scene of many important events in the history of Mexico. Many consider Querétaro to be the cradle of Mexican Independence, since the rebellion was planned here by Josepha Ortiz de Dominguez, also known as La Corregidora. However, on September 13, 1810, the plot was discovered by the Viceroyal government. Therefore, the Corregidora (who was the wife of the highest local authority) was locked in her room, while the rest of the plotters could be captured. Legend has it that she had to make noise with her heels in order to draw attention from Ignacio Pérez, who rode his horse all the way to San Miguel de Allende to warn other conspirators. This ignited the war.

In 1847, during the Mexican War, the city was made the temporary capital of Mexico, after American troops entered Mexico City. At the end of the war, in 1848, the Treaty of Guadalupe Hidalgo was signed there. In 1867, Emperor Maximilian made the city his last capital, and was forced to surrender. He was then taken out and shot on a hill outside the city. In 1917 the Mexican Constitution was written in Querétaro, which retains numerous colonial landmarks and is famous for its 18th-century aqueduct.

For more information on Querétaro visit the city’s official website at: http://www.mqro.gob.mx/

or the interesting site http://www.venaqueretaro.com/