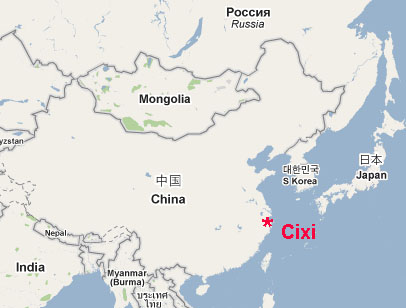 The Bell in Sister City Gardens – Donation from CIXI 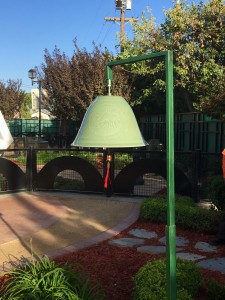 Bakersfield’s Sister City of Cixi (pronounced “Tsuh-Shee”), China is located in Zhejiang Province, China, on the shores of Hangzhou Bay, and northwest of Ningbo. It is in the Yangtze River Delta, in the coastal open economic zone of China, and is within the triangle of the commercially active cities of Shanghai, Hangzhou, and Ningbo. In addition it serves as the southern terminus of the recently opened Hangzhou Bay Bridge.
The idea of establishing a relationship with a Sister City in China began in 1993, during the tenure of Mayor Bob Price. Mayor Price was first contacted by the mayor of Tongling City, China. This relationship never came to fruition, nor did one with Ningbo, which was also explored. In May 1994, Mr. Han Guo-jing, Vice-Director of Provincial Affairs, and Mr. Lu Guo-han, Deputy Director of Provincila Sister City Affairs for Zhejiang Province visited Bakersfield, where the idea of an affiliation with Cixi, China was discussed. In July of that year, Mayor Price and Mr. Dave Urner visited Cixi, followed in November by a visit to Bakersfield by an official delegation from Cixi, led by Mayor Hu Yong-xian. The highlight of this visit was the signing of an interim agreement at a dinner held at Maitia’s Basque Restaurant. 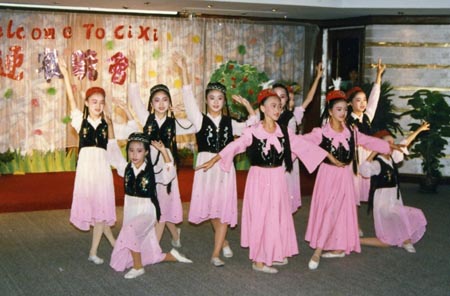 In April 1996, Bakersfield Sister City hosted the first All-California Sister Cities Conference at the Holiday Inn Select. One highlight of this conference was the Mayor’s Dinner, where Mayor Price of Bakersfield and Mayor Gao Yu-chang of Cixi signed a Sister City affiliation agreement. Also attending this dinner was Chinese Consul Han Tao and Chinese Vice-Consul Zai Jian-ju. This affiliation was approved by the Bakersfield City Council in March 1996 (Resolution 38-96).

In September 1997, Mayor Price and Cixi Chair Dave Urner led a group of 32 civic and Sister City representatives on a visit to both Wakayama, Japan and Cixi, China. Highlights of this trip included a visit to Cixi Experimental Primary School, where art by Bakersfield students was exchanged for art from Cixi students. Some of this art was later exhibited in the lobby of the Bakersfield Museum of Art (March 1998), while a brief exhibit was held at the Adobe Krow Archives in April, in conjunction with the Multi-Cultural Festival held in Central Park. Finally, from September to May 1999, the art and other exhibits about Cixi and Chinese culture were displayed at the Lori Brock Children’s Museum.

Since these initial visits, most exchanges between Bakersfield and Cixi thus far have involved civic and business leaders. Visits to Cixi by Bakersfield Sister City representatives and Mayors Price and Hall have included visits to local schools, where they were entertained by the students, as well as visits to other area attractions. However, a group of students from Bakersfield did visit Cixi in June 2004, where they stayed in Chinese homes. We hope to have more such exchanges in the future. Most recently, Mayor Harvey L. Hall led a delegation to Cixi in May 2008. The highlight of this visit was to be a ribbon-cutting ceremony for the Hangzhou Bay Bridge, but the catastrophic Sichuan Earthquake caused that event to be cancelled.

For more information on the city of Cixi, China, go to the city’s official website at: http://www.cixi.gov.cn/col/col16751/